Dean comes from an English surname, either a locational name meaning “valley” via Old English dene (valley), or an occupational name for someone who worked for a dean, the head of an ecclesiastical head of a cathedral. It comes from Latin decānus (chief of ten people) via decem (ten), which ultimately derives from a PIE root word.

A dean is also the head of a college or university, or someone in charge of a department or faculty.

Dean could also be used as a variant spelling of Deen or Dīn (دين), an Arabic male name meaning “religion, faith, creed” and “way of life” as well as having roots in Hebrew din דִּין meaning “law, judgment”, which seems to be derived from a Proto-Semitic origin.

Meaning: an English surname “valley” or “chief of ten”; from Arabic “religion, faith, creed” or “way of life”; also from Hebrew “law, judgment”

Viola comes from the Latin word viola meaning “violet (flower)”, related to Ancient Greek íon (violet) which seems to be derived from a pre-Indo-European Mediterranean source. In Italian, viola is the Italian word for violet.

Viola is also the name of a musical instrument though in this case the word comes from Italian viola< Old Occitan viola< Medieval Latin vitula (stringed instrument) which ultimately derives from a PIE root word.

Viola is the name of the heroine in Shakespeare’s Twelfth Night (1601-02), the twin sister of Sebastian, who dresses up as a man and becomes entangled in a somewhat humorous love triangle that all works out in the end.

Viola is also the name of a genus of flowering plants that includes violets and pansies.

Viola is also an Italian and Catalan surname; in the case of the former it derives from the female given name; the latter is likely an occupational name for a viol player.

Meaning: “violet (flower”); also the name of a musical instrument as well as the color violet 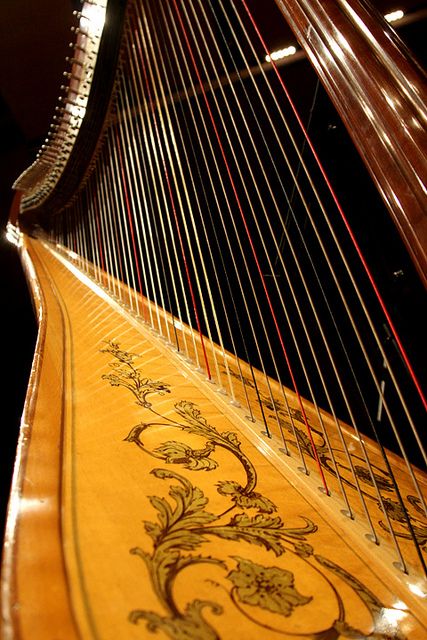 Harper is an English surname, an occupational name for someone who either made harps or played one for a living. The name comes from Old English hearpere (harper, harpist) via Old English hearpe (harp) via Proto-Germanic *harpǭ (harp) which derives from an uncertain origin.

Origin: Proto-Germanic via an uncertain origin

Meaning: “harpist”, in reference to one who plays the harp

Penfield comes from an English surname, a variant of pinfold which refers to an open enclosure for stray animals if their owners couldn’t properly supervise them during common grazing. It’s both a locational name for someone who lived close to one, or who came from a place called Penfield, or as an occupational name for someone who worked at a pinfold. It’s made up of Old English elements pund (enclosure) and fold (pen or enclosure for sheep or other domestic animals).

Meaning: “an open enclosure for stray animals whose owners didn’t supervise them properly during common grazing”

Lester comes from an English surname, a locational name for someone who came from the city of Leicester, England. The second part of the name is from Old English ceaster meaning “city, town” from via castra (camp, encampment) via a PIE origin. The first part comes from Old English Ligore, the name of a tribe living around the area, which may have been borrowed from the name of a river nearby (now known as the River Soar); the origin of the name is uncertain though it seems likely it has a Celtic source, perhaps connected to the French river Loire which may be derived form Gaulish *ligya, *legya (slit, sediment) derived from PIE root word *legʰ– (to lie).

Lester may also be a variant spelling of Lister, an occupational name for a dyer, which comes from Middle English litster made up of liten (to dye, color) made up of the feminine suffix -stere, both derived from a PIE source.

Clark originated as an English surname, originally an occupational name for someone who worked as a scribe or a secretary, or for someone who was a member of the clergy; in the Middle Ages only those who belonged to a religious order were able to read and write, so it may also have originated as a nickname for any literate man.

Gloria is a female given name which comes from the Latin word glōria meaning “glory, renown, fame”, used in praise, exaltation, or great honor of someone or something by common consent. It’s background is of obscure/uncertain origin; it may be related to Old Latin *gnōria (knowledge, fame) via PIE root word *ǵneh₃- (to know).

Gloria is also used in a religious sense, the name of several Christian liturgical hymns in praise of God, so it also connotes a sense of “divine glory”.

Gloria is also a Spanish, Portuguese, and Italian surname which originated either a matronymic name or as an occupational name for a singer, in reference to the hymn Gloria in excelsis Deo (“Glory to God in the highest”).

Mason originated as an English surname, an occupational name for a stonemason, someone who worked with stone. Masons were highly skilled craftsmen, responsible for the creation of thousands of buildings, castles, and churches, and stonemasonry was an important craft during the Middle Ages.

The word comes from Middle English masoun via Anglo-Norman masson, maçon (mason; builder) which may be derived from Frankish *makjōn (to build, work, make) via PIE *mag– (to knead, mix, make).